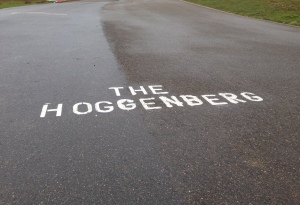 (Some) photos courtesy of Ian Lambert (https://twitter.com/IanLambert18). The good ones basically.

Likely to be my last pre-season outing, I was looking forward to heading back to Hog Hill for round 5. The weather was looking great, no rain, kind winds and I was feeling pretty good. Due to mud on the circuit (floodlights have been installed) we were racing clockwise, which means down the Hoggenberg and up the descent. Most of the circuit was dry but the usually first corner, now the last, was pretty muddy. It’s also off camber for maximum pucker factor. 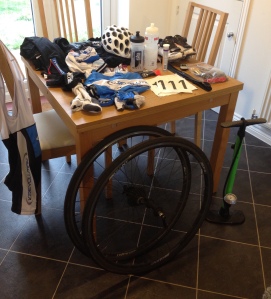 Ever wondered how much crap you need to take to a road race? Bike and rollers in addition for the pedants.

The event was marred by the sad news that a rider due to ride my race had been killed mid-week commuting in London. As a mark of respect the first lap of each race was neutralised and the bunch led round by his club mates to the applause of the supporters. I don’t think I raced with him, nor did I know him, but it was a fitting tribute. From what I gather similar events were held at the other road race circuits around London.

The race started at a fairly steady pace. I think most, like me, were not really sure of the circuit in this direction. The Hoggenberg had a nasty kink halfway down, not tight but the natural line took you out to the edge of the circuit and it seemed no two riders took the same line. The uphill was fine, no kick at the end but the last (first) corner was challenging especially if you had overdone it up the hill.

I set about floating about in the front third of the bunch, choosing my lines and keeping effort to a minimum. Having changed from 50/34 to 52/36 this meant a few more gear changes than before as I was using the bottom half of the block on the hill in the inner ring and most of the block in the outer ring on the rest of the circuit. The shorter crank length did also seem to be helping me hold a higher cadence. 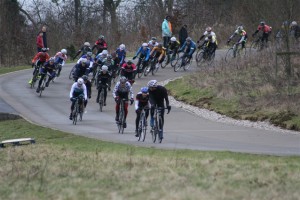 At the halfway point I found myself sitting comfortably in the top 10/15. Only a couple had attempted to go off the front and all were brought back pretty quickly. A few laps later I found myself on the front up the hill. Initial thoughts were ‘Oh shit, how did I end up here?!’ Despite images of blowing up (and heading backwards through the bunch like I’d been dragged off stage by a giant shepherd’s crook) I paced myself and pushed on through the final dip and over the line still on the front. I briefly considered an attack off the front but it was far too soon and there was no way I had the legs to make it stick in any case. Consigned back to anonymity in the bunch a bunch sprint was looking a certainty. 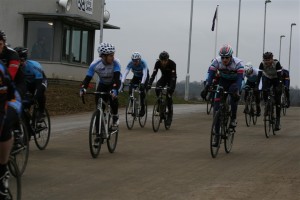 Roll on another few laps and we were approaching the last third. I’d slipped back a bit too far through not paying attention. Cyclingtips.com.au’s advice here is brilliant. If you’re not moving forwards, you’re going backwards (Well worth a read! –http://cyclingtips.com.au/2012/10/golden-rules-of-crit-racing). I set about working my way forwards again as the 5 laps to go board came out. By the start of the final lap I was well placed, probably on the edges of the top ten, until a crash blocked the road ahead of me. Those on the inside line got through unscathed but I’d lost all my momentum. A chase up the hill ensued but the top ten was out of reach by this point. A few caught me cresting the hill but I held off the remains of the bunch for what I think was 16th (results haven’t been posted yet). An improvement on last week, but a little disappointing as I’d felt good. Still, valuable training and another good chunk of miles in the legs.

Strava data below, complete with power data this time. Saying that though, the nature of the circuit throws out the averages.

Edit: I found this great video since the race (Courtesy of Thomas Willan: https://www.youtube.com/channel/UC9woSIYfS9EjG_-U3hBFCpg). Shows  I was further back than I thought at the end, lesson learned! Results are also in and I finished 14th rather than 16th.

I decided a few months ago that heart rate wasn’t quite enough to help me structure my training, especially given the limited time I had available. Since then I’ve been looking down the sides of the sofas and under the seats in the VX for loose change. After a favourable grant from the wedding fund, and negotiation of mutually acceptable interest terms, I was good to go! As I was also planning to change from a compact (50/34) to a pro compact (52/36) Stages wasn’t really the cheaper option despite already having the 6800 crankset. Replacement 6800 chain rings, it seems, are priced at pretty much the discounted price most retailers are selling the complete crankset for. Sneaky Shimano, sneaky! Effectively Shimano’s 110 bcd standard is only helpful to them as manufacturers and not us as consumers.

For the money I also wanted a true 360 degree power reading rather than half a reading doubled (This one could run and run…). I did my research and settled on Power 2 Max as the power meter for me. Unfortunately about a month after they discontinued the classic model range and about a week before the Euro took a dive….. 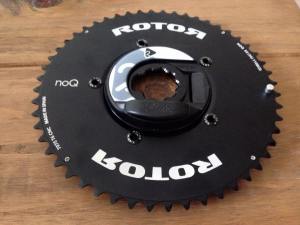 Two and a half weeks later, voila! It arrives. Hurrah! The noQ aero chain rings are likely excessive but just look the outer ring, It’s like an aerodynamic ninja throwing star! A Rotor 3D24 (what was the 3D) crankset completes the package. As I’m running Shimano cranks (and more importantly bottom brackets) on both bikes I can swap the power meter (complete with chainrings) from one bike to the other. 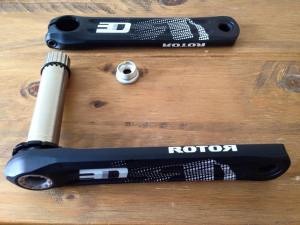 At the moment these are just expensive paperweights until I’ve made sense of this beast. Enter Mr Coggan and the power training bible. It may look heavy going, but it was this or study for my next exam, helpful research based power training, or the regulation of pension schemes and retail investment advice? Tough choice…. 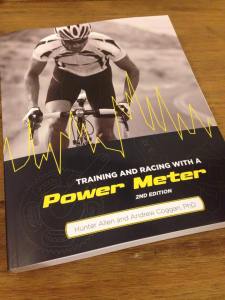