So then, one round down, two to go. Three points needed.

This is a track of mixed fortunes for me but one I love. I raced here in January and got round ok in my first few races. I’d also raced a couple of 3/4s here later in the season and got unceremoniously dropped. Lets not even talk about the 50 kph faceplant. Its a circuit your legs will remember the next day that’s for sure. 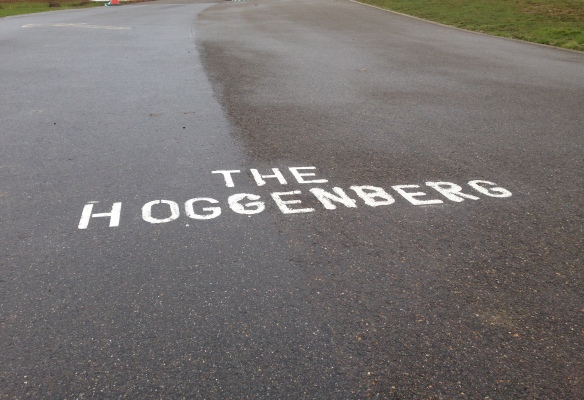 Matt the mountain goat had joined me and as usual we weren’t taking things too seriously. That’s one thing I’d noticed about road racing. Everyone is so serious pre race. I mean, sure, we’ve all invested serious time and effort in our pursuit of points but its supposed to be a hobby, you know, fun? Well, that’s what Tom Starmer has been telling me repeatedly and it’s easier to appreciate when your heart rate is under 180 bpm. Dave Hales was Chief Comm for the day so I was guaranteed some ‘helpful’ advice and encouragement on my way round. There was a crosswind blowing across the hill from right to left so it would be important to stay on the sheltered side. It’s hard enough dragging my 75 kg arse up that hill without a cross headwind in my face.

The races were getting increasingly frantic and this was no exception. The twitchy bunch wasn’t helping my nerves that’s for sure. but at least the hill was keeping everyone honest and keeping the effort levels up. Two got away fairly early on and built a lead of about 40 seconds. I attacked the first prime hard as a test run for the last time up the hill. Its so important to keep on top of the gear and keep the cadence up or you just grind to a halt when the hill ramps up. It worked and I won the bunch sprint. Hurrah, this could work! Back into the bunch I went doing my best to stay out of the wind and do as little as possible. Roll on a few laps and the two were still off the front. The bunch had let the gap go out a bit and when two buddies of the guys up the road brought the pace down that bit further Matt reached his limit. I had to laugh as I heard Matt hit the front with a shout of ‘its not a f*cking club run’. If his effort wasn’t enough, the words were. The chase was on.

4 laps to go and a dude from Cambridge got fed up of of the bunch rolling around looking at each other and did a one man demolition job on the field. I’d been a bit further back than Matt when the bunch split in front of me. Eight or so were in the lead group (with two still up the road) and I’d ended up in a group of about five stuck in no man’s land. A couple were willing to work but no-one was really strong enough to bridge as a group. With the gap growing I attacked hard into the descent and tried to bridge across solo. For once, my additional ballast came in useful. Being on my own I could absolutely rail the corner at the bottom of the descent. Man, that’s a blast. With the wind in my face after the hairpin I was careful not to overdo it going in to the base of the climb. I bridged over just as they crested the hill with one other guy.  There were 10 of us in the lead group now so unless two dropped out points weren’t guaranteed. The rest of the 30-40 strong bunch was strewn around the circuit behind us.

Last lap and we were still strung out behind Cambridge boy, he was strong no doubt, bit daft as he had been on the front for two laps, but definitely strong. Halfway up the hill for the last time and I chose the sheltered left hand side. Matt went right. The attacks came but I was already moving up, come on legs this could be it! The guy in front picked left too though so I got boxed in and I had to settle for 9th. Again! Matt bagged 6th though and got his 3rd cat. Good lad! I’d felt like I’d given this one everything so although disappointed not to get the points I needed I was happy with how I’d raced. Totally stoked for Matt too. I had kind of hoped that this would have been the end of my season though….

Not raced here before. I’d heard it could be messy but seeing as both Cyclopark and Hog Hill had been messy recently I thought why not. I was back in Hemel for the weekend so I wasn’t far away and this was supposedly a track for the sprinters. Not being a climber, I must be a sprinter right? Matt had pre-entered so he had a race but couldn’t score points. One of the two guys that had ridden off the front last week was in this race so he couldn’t be allowed a gap. Enter Matt the super domestique. Wandering around the HQ it seemed there were plenty of others chasing those last points with team mates willing to help. All were supposed to be racing for themselves but it was clear that wasn’t going to happen.

The track was wet and greasy, less than ideal given its a fast track and I’d never raced here. It would be a tailwind finish so really I’d need to be in the first ten wheels going into the bottom corners to stand any chance. Pace wise I was perfectly comfortable, we tooled around for the first half before the siren went for the prime. Matt had been doing a sterling job marking the moves, particularly the big man from Hemel. I’d clocked someone shouting for Pete near the finish line. Took me about three laps to realise that Erin had come out to cheer me on. A nice surprise! Whilst an hour stood in the cold is probably not how she would have wanted to spent a Saturday afternoon it really does make a difference hearing someone cheer you on. Unfortunately she got her own surprise when a guy went down right in front of her in the sprint for the prime. I’ve no idea why half the field bothers to be honest. It’s £20 and even Mark Cavendish couldn’t make it from 20th to 1st. I’d been well over the other side and missed the crash. Broken collar bone for him and a broken wrist for the guy behind him. Ouch.

The race settled down again until the 5 to go board came out. 4 to go and there was another crash. This time a chap faceplanted on the approach to the tight left hander at the top of the rise. He was sparko on the track when we came past next lap so I was expecting the race to be abandoned. Nope! Next lap round and the first aider’s car is parked on the apex of the corner. VW Tiguan’s aren’t particularly soft and squishy which distracted me a bit. Note to self, focus more! Anyway, with 2 to go I’d moved up nicely whilst two guys from Dulwich Paragon had gone off the front. It wasn’t sticking though and they were caught with half a lap to go. Approaching the last two corners and I was on Matt’s wheel and we were both in the first 15. This might just work!

It didn’t. We went to the right out of the last corner and got a bit boxed in. Wouldn’t have mattered at Cyclopark but Hillingdon is pretty narrow. It didn’t hold us up much, but by enough that I couldn’t quite get into clear air soon enough and the line wasn’t far enough away to make up the lost ground. 14th place was the result and a major disappointment given the build up of the last few weeks. I was pretty crushed to be honest. I guess it wasn’t meant to be this year. There was the option of racing on into November but given how messy the races had become I decided to call it a day for the season. Strangely it hadn’t been a hard decision. It had been a roller coaster of a season both physically and mentally so by this point I was ready to knock it on the head and spend a few weeks just enjoying riding my bike. Had a few beers that night with some good mates which finished the season off nicely.