Last weekend already seems like a long time ago. Work is crazy busy, like every March, and I’ve got an exam in a little under a month. What joy,  time to revise! Which brings to an end my first “peak” of the year. I realised last year that you (or maybe just I) can’t be strong all season, so I pick a group of races and try to get the peaks in form to appear somewhere vaguely close by. Doesn’t always work but it seems to prevent those almighty pits of fatigue and illness that follow long periods of mashing yourself into the ground. I had two days rest after Sunday’s race but even by Wednesday the legs had nothing, not a thing! I’d been going full gas since January so it was probably time to rest.

So, last Sunday you ask? What was that all about? What began as a joke became my first daft decision of the year. Possibly also my best decision of the year. On paper entering a National B road race a week after getting 3rd cat probably seems like madness. Bear with me here and I’ll explain. So to my mind a race can go one of three ways, which are: 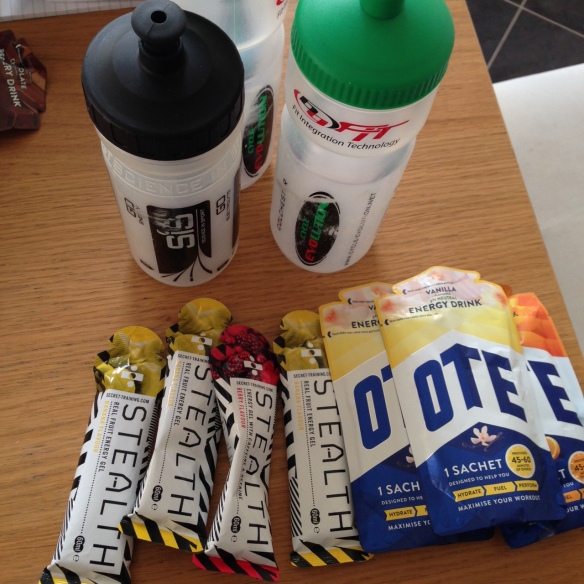 Really impressed with the OTE and Stealth products. Vanilla OTE = amazing. No idea what Betaine is in the elderberry gel but it seemed to get me round though. Note, concentrated banana gels will turn anything they touch radioactive, including skin suits, race numbers and carpets. Don’t ask me how I know.

So, this National B. The Jock Wadley Memorial Road Race is the season opener for many of the big domestic teams. It also just happens to be held on a circuit less than 2 miles from my house. The Wadley is open to Elite and 1st cat riders in addition to the 2nd, 3rd and 4th cats that I usually race with. For my non racing buddies these guys are either already pros, semi pro or seriously strong amateurs. Don’t get me wrong 2nd cat is a world away too but I can just about cope with a 2/3/4 road race, maybe even more than that this year. As a comparison a typical week for me is anywhere from 5-8 hours of training. Due to a clash of calendars the only UCI team entered this year was Pedal Heaven. They are doing a pretty good job of turning the podiums of the South East black and green and would be the team to beat. Plenty of other serious outfits (complete with team cars and spare bikes) were entered but the absence of some others big names meant the start list was a little shorter than usual. I had thought the 2nd cats in the club might fancy it when I shared the link below. What I didn’t expect was a barrage of “get signed up Pete” “It will be a great experience” “Just hide in the wheels” Oh how I laughed……

A week later, now with my 3rd cat upgrade in the bag, and the chance to race big teams on home roads became just too much to miss. That’s something I love about road racing, you can end up sharing a start sheet with serious talent. Turns out there was a former track world champion and British road race champion on the start sheet, not to mention plenty of youngsters that have big futures in the sport. Crumbs. Slightly daunted at this point, not helped by the most common reaction being laughter and that expression that suggests you have grown a second head when I mention I’d entered. Predictions ranged from getting dropped in the neutralised zone, after 2.3 laps (very specific James) to an optimistic 6 laps (thanks Graham!). I genuinely had no personal expectations, obviously I wanted to hang on as long as possible and I was keen to see the lap board at least once. I fully expected to get blown out the back with very little warning, like being jettisoned into space. With a field like this it was a matter of when not if.

Dave Hales (and his friendly megaphone) was the Chief Comm for the race. Not often you get you numbers repinned personally closely followed by a £5 fine for folding them. D’oh! Dave would become a useful reference point. i.e.  If he gets louder i’m slipping back in the bunch and need to move up. So, off we roll and the road from the HQ to the main road is possibly the worst road in Colchester. If I’m honest I was secretly hoping for a puncture “Oh well, I gave it a try, wasn’t to be etc etc”. No joy, so we rolled out on to the circuit en masse. I bloody love this part. 80 guys rolling out in close proximity, motorbike escorts,cars front and back and plenty of confused looking old dears popping out for a pint of milk and wondering where the Tour de France came from. So cool. The race is neutralised until we reach the circuit, but everyone wants to be at the front and there’s a hill just before the turn onto the circuit so it’s not really neutralised at all….we reach the circuit, right turn, hammer down, and straight into a descent and a rolling drag up to the top of the course. I got out of the neutralised zone at least. Wahey! I was happy enough at this point to proclaim mission complete to my club mate Tom. He was the only other from theclub daft enough to enter. He had picked this race as his first after seven years out. Wowzers.

This, then repeat Photo credit: @Spikervelo

I didn’t have time to celebrate sadly, given the experience and the size of the teams involved I was expecting a complete smash up until the right composition of riders got away in the break. This is the bit of a race you never see on TV. The break will only get away when the bunch lets it so for that to happen the right teams need to be represented. Until then it will be attack after attack until the bunch lets it go. Thankfully, it only took about a lap. “Not so bad this” says Tom. Famous last words….

Courtesy of Jamil. 800 watts out of a 90 degree bend, with a marshal point on the other side and a 45 mph descent shortly after. Felt so pro.

Average watts only tell part of the story  here as they take into account the freewheeling and soft pedaling in the bunch but I’ve tried to give you an idea of the relative intensity of each 7.2 mile lap.The maximum wattage gives you an idea of how hard the kicks were out of the corners, we were doing that every lap, several times a lap and its that really wears you (me) down. As you tire, the gaps start to get bigger and the kicks need to be harder to stay on. By now it’s just a matter of time until the gap gets just a little too big. The heart rate figures compare with a maximum of 196. Don’t often see that to be honest, a race winning sprint at Cyclopark only peaked at 188.

My usual road races last about 2 hours so it was no surprise that my legs fell off before the finish. To be honest I thought I would have got dropped long before 67 miles! It was the kicking I expected, a bit easier in some places would you believe as the bunch really flowed. Provided I stayed up in the bunch I seemed to be ok but these guys move around and move up so effortlessy I often went from safe mid bunch to near the back pretty quickly. Moving up took either a good few miles or a big effort. On around lap 5 or 6 I found myself on the windward side of the bunch (I know, I know) and wasn’t quite quick enough to get into the gutter. Obviously no one will let you in and you can’t help but take some satisfaction when the position is reversed and you are coasting along in someone’s draft whilst they suffer in the wind. I’d been merrily plodding along at 150-200 watts, minding my own business, when suddenly i’m doing 400 watts and fighting to hold the wheel in front. That burnt more than a few matches let me tell you! Given the field I was in I couldn’t help but feel that my match box was a little inadequate compared to those around me. Obviously I forced a smile each time I passed the finish but it was murder, agonising leg sapping murder. Totally worth it though! It was a fantastic experience racing on home roads with friends and club mates cheering from the side of the road. Next year you never know, I might even finish. A 19 year old lad that went from 4th cat to 1st cat (that’s 252 points and the equivalent of 25 of the crits I won) in three months last year won the race, just edging Lloyd Chapman of Pedal Heaven. Chapeau Spirit Bikes, beautifully ridden.

Strung out, I’m in there somewhere….Photo credit: VeloUK on Twitter

2 thoughts on “The three types of race”