So then, eight points, that’s seven more than the goal I set myself at the start of the season. Back then I just wanted to be strong enough to get round a 4th cat crit without getting dropped. So that’s all good, mission accomplished you might think? Errrr no, not quite.

As ever, goals change and ambitions grow. I’d said earlier in the year that I wanted to earn #sockdoping. I’m more than capable of looking all the gear no idea without the socks so that meant 3rd cat. Joking aside I was keen to get my 3rd cat license so I could stop worrying about points and start racing for decent results. 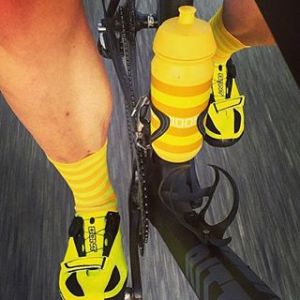 First up though, my last road race of the year. I’ve not ridden many road races but I’d felt like it was coming together at the Easterly Leaves in September. A road race is a totally different beast from a 1 hour crit, not least because of the length, but also because they are almost like a chess game on wheels. I’d just been trying to get round them really and gain some experience for next season but it would be good to end the road race season with a decent result.

The course was fairly flat, even for the Eastern region. It had one nasty sharp incline that felt like your legs were turning in treacle when you hit it. The usual early attacks meant that the first lap flew by. A group got a gap on the second lap and started working together. I had flashbacks to the Mid-Suffolk where the early break was never seen again and with it the prospect of any points so I bridged over with another lad. I had just about got past stuffing my lungs back down when the bunch brought us back. It had been worth a punt.

Next thing I knew the bell was ringing. Why am I so far back? The final mile or two went nasty hill, fast gradual descent, tight 90 degree left, then a short sprint.  By the turn I was still too far back (as ever) but I had a clear path to the line which came up far quicker than I expected. Arse, I really must start moving up sooner. I think being new to the road there is almost a nervousness about going too early and blowing up. In reality most of the other guys are in the same place and often those that make the first move gain an advantage that requires everyone else to go that much harder to mark it. At least I got Jamil on the line though so it wasn’t all for nothing!

Latest edition of ‘Where’s Pete’. He’s there, somewhere in the distance…

So then, round 1 of what Matt and I had dubbed the desperation crits. Earlier in the season you could avoid the chaos by riding in the first ten or so wheels. By October the chaos seemed to be everywhere. I’d only ever seen one break get away in a 4th only crit so I was taking a punt, call it an educated punt, by loitering at the back of this one. Matt was doing the right thing and staying in the first 5-10 wheels and doing as little as possible. Fast forward 15 or so laps and we had made it to the 5 lap board. Along the way I’d been overtaken on the grass and Matt had near been forced off the track by some dude trying to ride out the side of the bunch. I mean wtf? Can you see why I want my 3rd cat license? Anyway, the pace picked up and we had a race on our hands rather than a disorganised club run.

On to the final straight and I was near the back of the bunch (there’s a theme developing here). I had moved up on the back straight so I’m not too sure how I ended up here again. A chap ahead of me panicked and gave me a great lead out so I made it back to the pointy end of the bunch by the last 100 metres or so. Nice! The bunch was beginning to spread out ahead so I picked the sheltered right hand side and nailed it. I found myself alongside Matt in the final 10-20 metres with a narrowing gap in front of me. If it had been anyone else I would have bailed but I knew I could trust Matt not to do something daft (could have been an awkward drive home!). We crossed the line practically side by side. Matt was a wheels length ahead and got 7th, I’d managed 9th. Somewhere in the bunch there had been a wheel between ours on the line which is pretty crazy. I left Cyclopark a bit frustrated thinking I could have got a better result, but also encouraged that I’d managed to get a point despite my terrible positioning. Matt was happy, this ended a terrible run of luck for him and a points drought that went with it. He only needed 6th place now to reach 3rd cat. I needed 7th.